Last weekend I visited the Tower of London, which gave me a great opportunity to try out some of the Photogrammetry ideas I have had in the past few weeks.

Apart from testing 123D Catch out on large monuments and entire palace façades, I decided (thanks to the suggestion of Helene Murphy) to try modelling some of the graffiti that were made by the prisoners there. The main aim of this was to see if I could create models using photographs from dimly lit rooms, but also to see how it would react to glass, as the inscriptions were covered by panes to protect them. I also wanted to retest the Radiance Scaling tool in Meshlab, to increase the crispness of the model and see if it increased the accuracy of it.

I concentrated on 3 different pieces of graffiti that can be viewed here (embeded thanks to the suggestion of alban):

Tower Of London – Graffiti 1 (click to view in 3D)

Tower Of London – Graffiti 2 (click to view in 3D)

Tower Of London – Graffiti 3 (click to view in 3D)

The models turned out better than expected. The glass is entirely invisible, which required some planning when taking the photos, but gave no problems in the modelling. This is particularly good as it means it should be possible to apply the same concept to artefacts found in museums behind glass.The lighting conditions themselves didn’t cause any issue that may have been expected, showing once mor the versatility of Photogrammetry.

Running the Radiance Scaling shader in Meshlab also returned really interesting results. In all cases the models become much more aesthetically pleasing, while at the same time the curves and dips are emphasised for increased crispness of the model. Although this to me seems to be a forced emphasis, that may cause a lack of accuracy, the results at the moment seem to suggest it may increase in some ways the accuracy instead, This however needs to be further explored. 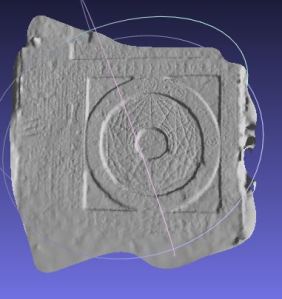 One thought on “Recreating Tower Of London Graffiti Using Photogrammetry”