Three of the skeletons found at the site of Ham Hill, Somerset during the 2013 excavation are now available to view online at the following links:

The skeletons were discovered during this year’s excavation carried out by the Cambridge Archaeological Unit and Cardiff University, at the site of an important Iron Age hill fort. They are only some of the many human remains found, some of which were carefully placed within a number of pits, while others were located symbolically within an enclosure ditch, often with body parts missing. 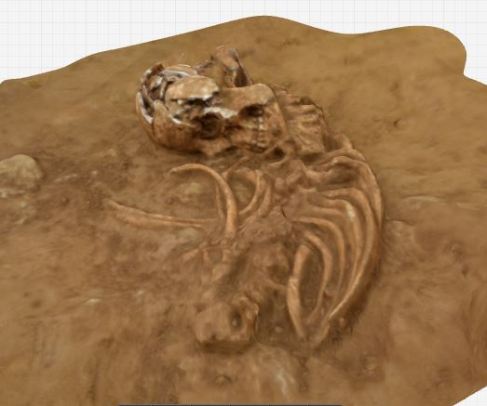 The models themselves were made using Photogrammetry and specifically 123D Catch, which required very little time for quite good quality. The aim of this was to preserve a record of the skeletons in situ for further interpretation once they had been removed from the location they were discovered in.

Given the complexity of the subject, the results seem to be very promising. Time was a big factor when making the models, as they had to be removed before damage occurred. Some of them were also in tight spots, which made it hard to access some of the standard angles, but overall this was counterbalanced by taking a larger number of photographs than normally (around 30 per skeleton). The lighting conditions also proved to be ideal, as there was an overcast sky, but also sufficient sunlight coming through to really emphasise the surfaces.

For further information on the skeletons I suggest reading the article at http://www.bbc.co.uk/news/uk-england-somerset-23928612