One of the advantages I find in Photogrammetry is that unlike other methods such as laser scanning and regular 3D recording, the results are photorealistic. The models seem natural and precise due to the textures that are associated with the points, and aesthetically it is much more pleasing. In addition to this it is amazing for archaeological recording, as all colours and shades are preserved as they were originally.

However the more I experimented with this great technology, the more I realised that as useful as this tool is, the textures sometime give us a wrong idea of what is going on. Generally this causes no problems at all, but in some situations I have found myself trying to get things to work and failing due to a false perception I had of the model.

A good example of this are these graffiti from Cardiff castle.

The model itself is not great. It was made with my Iphone camera, and I didn’t even use the maximum quality on 123D Catch, however it does help me prove the point.

I spent quite a lot of time trying to test a theory of mine, which I’ve written about before. Theoretically, using a filter or renderer on a photogrammetric model, it should be possible to emphasise inscriptions in order to make them clearer. I was originally trying the APSS filter, but I recently read articles suggesting the use of Radiance Scaling in Meshlab (I’m still experimenting with this, but results seem positive for now). Therefore I decided to test out a number of filters on the graffiti model, as the ridges of the letters appeared to have been handled very well by the program. Even when rotating the textures caused me the illusion that quite a few points had been found around each letter, points that I could manipulate to my advantage.

Having played around for some time with no real results, I decided to try removing the textures to manipulate the shadow, but having done that I noticed that the beautiful ridges that had appeared previously, disappeared when the textures were removed, like so: 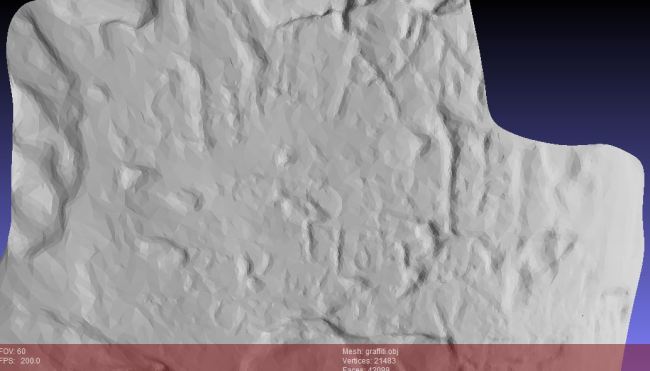 Looking at it even better I noticed that the points that had been found were basically evenly distributed, rather than surrounding the letters as I first thought. As a result the reason the filters were not working was because there was nothing to work on. 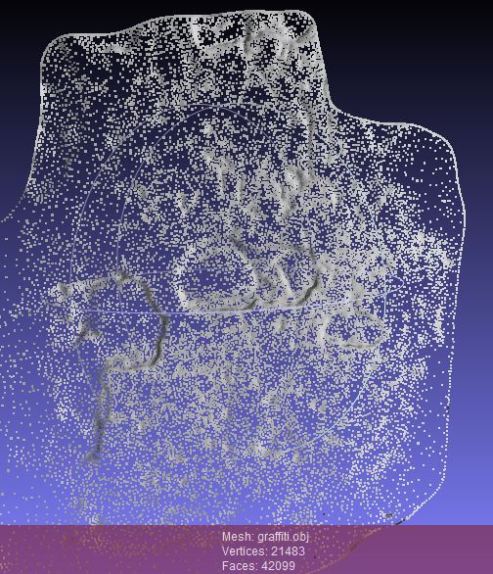 So even if the textures were providing a much needed aesthetic relief, and helping with the recording, for more specific actions they only got in the way, creating illusions.

This however does not in any way limit the technology. The case shown was that of an extreme case, in which the circumstances caused a lack of points. Most models have a much larger number of points and a greater accuracy, which makes it suited for most situations. However when pushing the limits of the technology it is important to remember that in the end the model is just a collection of points, and that these are where the potential is.