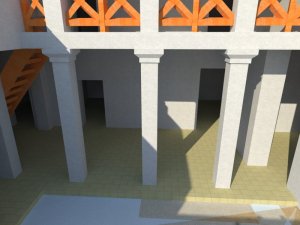 Having talked for the last few days about Sketchup and its uses in Archaeology, I thought I’d complete this line of enquiry by showing you another model I made during my second year and briefly presented before, a house from the Classical Greece site of Olynthus.

Much like the houses of Zagora I covered before, the house at Olynthus is a great example of domestic space in the classical world, with an inside courtyard and different rooms of which for the larger part we know the function. The reason or Olynthus in particular is that in this case the houses have all the elements of houses in the Classical period, and the base plan is repeated throughout the entire town.

The main reason I chose this model was that it was a challenge. Previously I had only reconstructed the Parthenon, so I was not entirely used to closed spaces. In addition, I had the actual site reports handy, which meant I could reconstruct the house reliably, with little left to imagination. Finally, it gave me a chance to investigate issues of lighting within closed spaces, and settle a debate that I’d read about, regarding a possible need of a flue to provide lighting to some of the rooms.

Apart from the use of components, that I’ve discussed already, I found two interesting things with this model: the use of visualisation to understand the use of space, and the aforementioned lighting tool.

One of the main issues I was having with the house was the presence of a ladder, which would have allowed transit to the upper stories. The location I originally intended for it didn’t actually fit, something that I only realised when looking at an initial draft of the model. It was too steep, and if it extended any further to reduce this it would have blocked one of the doors. Therefore I decided that the location had to be wrong, and tried many different positions that could be possible. The one I finally settled with was the only one that “looked” right, and after reading the report again it turned out there was a base for the ladder in some of the houses in that exact spot. 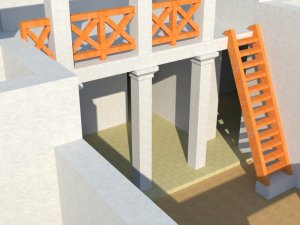 This is probably insignificant on the long term, but it made me think that the only way I realised the position was wrong was with the added dimension, as the 2D plan didn’t give me sufficient information to realise.

The issue with lighting was part of a debate I was reading, about an area of the house interpreted as a flue. Some suggested this area was open at the top, in order to allow lighting, while others thought that the lighting in the room was sufficient to carry out basic activities. I therefore created an entire street by repeating the house, and placed windows as suggested by the report. I then rendered the images with and without a hole in the ceiling. 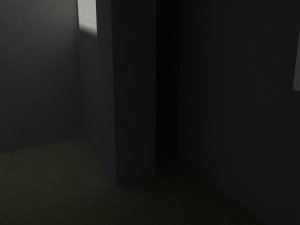 The results are not of the most conclusive, although there is a difference between the two rooms. This does however suggest that a hole in the roof would have not been sufficient, so it is possible the flue was used to conduct smoke from a fire within the room.  Again, in this particular instance the results are not ideal, but in other models the idea may have more success, especially in enclosed spaces.